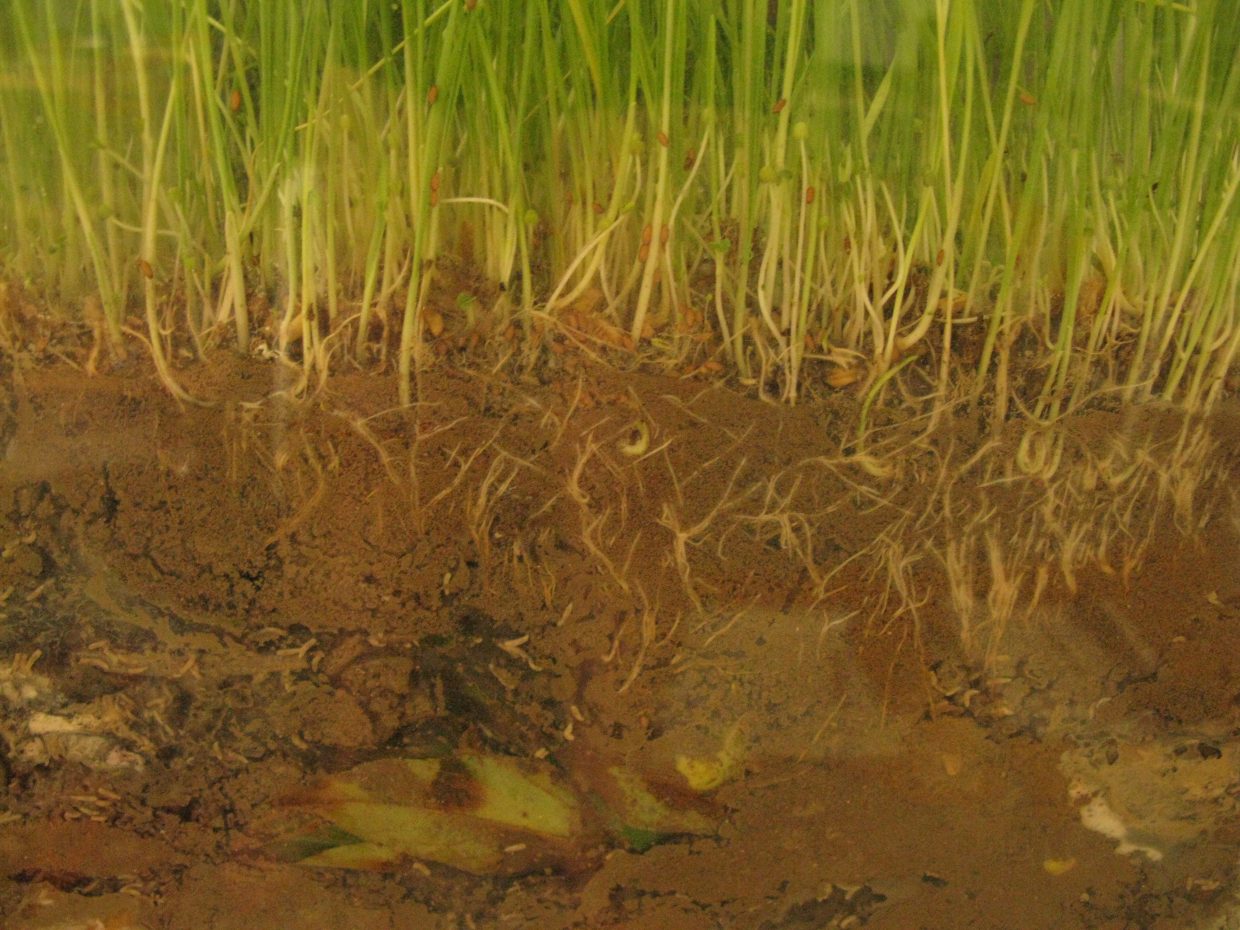 A trend leading to a project called “the Contract of Life and Death” has spread throughout my personality and thoughts for years. During my Third decade of life, thoughts such as death, feminism and feminine corporality have been the life theme associated with the disease of depression and life for an anti-structure woman like me in an anti-feminine society. On the other hand, enthusiasm for life, its continuation, loving and being loved in contrast with life hatred, while I had been inspired by the Georges Bataille’s outline, “Erotism: death and sensuality” have caused incessant thinking in me about the contrast between and the closeness of life and death.

One of the forms performed in this connection is an aquarium containing soil, plant, animal and decaying materials. While at the same time decay increases beneath the soil, grass will grow on it.

Many living beings beneath the soil simultaneously come into being, feed, grow and finally fade away from materials decay in the journey of death. The aquarium was fated to be photographed among plants and trees in order for part of realities beneath the soil to lie for the 1st time beside what is happening on the soil surface. The life and liveliness of this lump of soil are not less than those outside it.

The decay factor in fact decomposes the old and dead beings to be the necessary agent of life continuation. Decay is usually completely intelligently hidden. Our habit is not thus to see it which can however be watched. We can observe in it its beauty, calmness and silence, an ever-changing painting board!

Yet in the meantime, I also deal with the sensitive relation between death & reproduction, death & sex and death & nutrition. Contrast between death and reproduction sounds clear. Birth and death are a highly-applied double. Both are perfectly contradicting processes which are perhaps reconcilable. Being together, these 2 will constitute life. Thinking about sex is an inevitable conduct when the issue of reproduction and birth comes in between. On the other hand, man’s sex tracts, which cause the formation of a new creature and a new birth, are like the excretory tracts. Here, we again return to the relation between death, life and decay with nutrition.

Man is perfectly entitled to demean and contemn sex affairs and sex pleasures or at the same time, take pleasure out of and pretend to shy at them, for they are in the close vicinity of the body sewage tracts and excretion of decay and pathogenic matters.

Beside all of these, the presence of menstruation blood in my feminine body provokes certain thoughts and feelings. I believe that anything which may represent these factors, including blood, embryo, excretion, soil, plants, insects and many others, are applicable as the work material or asset. In this project I will try make my prediction about philosophy of death more.

As it has applied so far, I intend in the future to deeply dip into what are called visualisation, incarnation, dreams, images and reflections of the unconscious mind. I know no limitation in this voyage or journey into destination. This is a project, which will be included with death, decay and life, to be my major work theme, and also the asset of performance, land-art, installation, video, etc. In Artistic Research – my continuous project